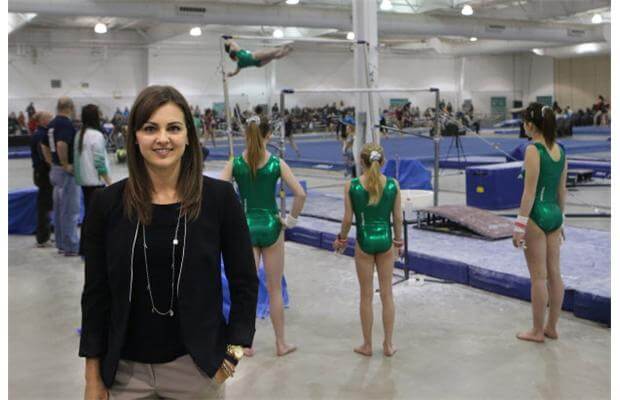 Marta Erlandson, a U of S researcher, has found gymnastics helps strengthen kids’ bones.
Photograph by: Richard Marjan, The StarPhoenix

Article by Jonathan Charlston, The StarPhoenix

Children who take gymnastics lessons may gain protection from osteoporosis later in life, according to a new study.

“Personally, I think gymnastics is a very good activity,” said U of S researcher Marta Erlandson, a former competitive gymnast.

“It teaches a lot of spatial awareness, body awareness, neuromuscular control, and then it does have good benefits to bone health.”

Bones stop growing after a person’s late teens or early 20s; after that, you can only slow the rate of bone density loss.

“So when kids are growing, we want to look at what ways can we increase the amount of bone they have in their body so that as they age, they’re less likely to lose an amount that will put them at risk for fractures later in life,” Erlandson said.

Research shows elite gymnasts – girls training at least 15 hours a week through childhood and adolescence – have much higher bone strength than other athletes or children who don’t participate in anything, she said. They also tend to maintain a higher bone density after they retire.

However, elite gymnastics isn’t something every child can do, and there’s some suggestion that it’s tied to high injury rates, Erlandson said.

She decided to look at recreational gymnastics, to see if just an hour a week of the activity would have any benefit.

Erlandson followed 160 young gymnasts over four years during her master’s and Ph.D studies. They had higher bone mineral content and higher bone strength than those who did other activities such as swimming, hockey and soccer.

Even those who only did one or two years of training still saw some benefits.

The spectacular feats performed by Olympic gymnasts may make the sport look dangerous, but at the recreational level kids are learning basic skills such as landing properly, jumping off boxes, swinging off bars and crab walks.

Unlike many sports, gymnastics has a high impact on the arms.

The pressure causes the bone-building cells to build more bone.

“The greater the pressure that’s in there, the more bone that’s going to be built,” Erlandson said.

In fact, kids who did gymnastics had a surprising 20 per cent higher bone strength in their wrists.

So far, her research has involved kids who were already into gymnastics. The next step is to take children who have never done gymnastics, put half of them in that activity and half in something else, and compare the results. If funding comes through, Erlandson plans to begin that study this fall. jcharlton@thestarphoenix.com twitter.com/J_Charlton

Time for your child to work on skills, or just burn off energy with friends. Gymnastics Open Gyms are included with membership!

Pacific West Gymnastics offers many family friendly events throughout the year. Take a look and see what's coming up next!

Get the latest news on classes, events, camps and programs. Our news blog puts a fun spin on our specialties.